Been busy the last week.
Seat is on and the mudguard is finally mounted, just got to join up the tack welds.
The bike looks so much more complete now, I'm really happy with how its coming together.

Eventually picked these up - they are probably the nicest motorcycle thing i have ever owned!

Tonight I have been mostly

Scored the beams for free, paid £35 for the ply top and used the off cuts to make a base for my lathe and spent about £6 at the friendly local steel merchants for a few metres of threaded bar and a bagfull of nuts and washers, couple of hours labour and hey presto - beats spending £300 on one.
This thing could hold up a tank.
Just got to sort out a ramp - might make something using a bottle jack.
Posted by pptom at 14:25 1 comment:

Bloody wheels still aren't built, thats six weeks now and counting and they're holding me up. Anyhow, I was scratching my head thinking what to do to move things on and decided I could get the seat mounted.
Had a couple of ideas and mocked the seat up in various positions, but in the end, decided that the cross tube on the hadtail was too far forward.
I've always thought this - seems to be made so you can put a 21" wheel in the rear with plenty of clearance, its not the first problem with the hardtail either - took me a day of messing about when i first got it, trying to get it lined up, which eventually ended with some cutting and welding.
Anyhow I got a replacement tube cut and the ends radiused, stuck a surrogate rear wheel in the frame to brace it and welded the new tube in place, with the old one still there so nothing moved too much with the heat.

That was easy enough, but it was a right pain removing all trace of the old one - got there in the end though.

eventually got round to starting the seat mounts, but, its Saturday night and I can hear Sailor Jerry calling out for me - they can wain till tomorrow.
Posted by pptom at 10:08 No comments:

Been after a Lathe for a long time, finally bit the bullet last week and brought one. Its brand new, Chinese made, but very popular worldwide, with lots of tech articles and parts avaliability - also comes with a warranty.
Its only classed as a 'mini lathe' as its 7" x 14", but should be plenty for all I need - for the time being!

Received yesterday, I spent last night cleaning all of the packing oil / grease off and setting it up. Spent tonight on my first project - as pictured above - a pair of recessed bolt holders which will be bolted to the axle plates and will carry the fender mounts. I'm chuffed to bits with them, I know they're not the most complicated thing,  but I've not used a lathe since college, so tonight was a steep learning curve, I think they turned out really well. 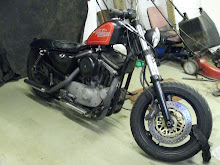